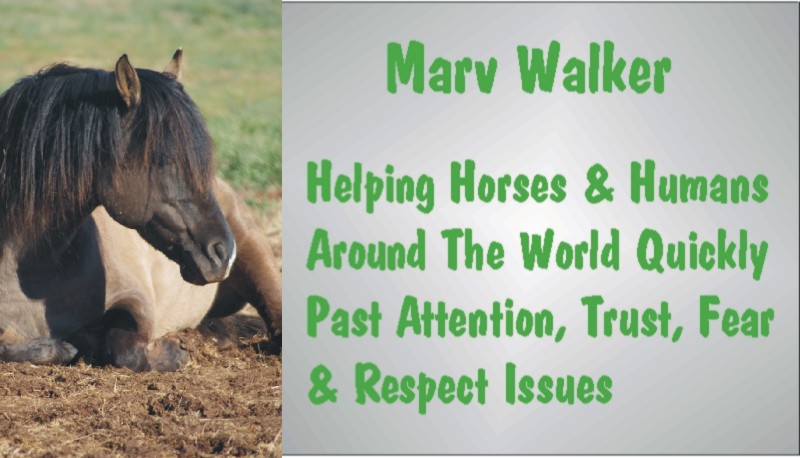 "Teaching Foals To Lead
When They're Bigger'n
You Are" Video

Using Pressure And Release To Teach Foals To Lead

I saw the mare standing away from the rest of the herd with her head hanging close to the ground. This was totally unlike her and I thought something was wrong since she was close to foaling. As I drew closer I saw a foal laying motionless in front of her. I was certain it was dead.

I stood next to it and looked down, "Must've died after it was born since it's dry and fluffed." I thought as I stood there and looked at it while mentally preparing its burial.

And then I saw the merest twitch of an ear tip.

I then began talking to the mare and the foal and it still didn't move. I nudged it with my boot tip, nothing. I nudged it harder, still nothing.

I gave it a solid push with my boot and loudly said, "Hey, you! Wake up!"

He opened his eyes raised his head and looked at me for a second then promptly went back to sleep.

Nothing, and I do mean nothing bothered that colt. He was laid back as all get out and handleable from day one.

I've had some requests for a foal leading video and he's the only foal I had access to at the moment. Since my videos are "what you see is what you get" and cover situations as they are and working from where you are at the moment I thought, "Oh well, it'll be boring as all get out and he'll be laid back, but, hey, work with what ya got."

The colt that nothing bothered decided to be bothered the day we shot this tape.

He was having nothing to do with that halter. If he had not been concentrating on my dubious parentage I might not have been able to jam him against the stall wall and get the halter on at all.

Well, it does have a few moments of banging and crashing as we tore the barn apart before Bob, the camera guy, asked if I needed any help getting him to the work enclosure.

The camera guy and I were the only ones around and it took the two of us to bull the little sucker into the working area which is why the video doesn't cover any of the first few rounds of the session where we simply manhandle him where we want him to go.

This 2 hour or so, 2 session video covers how to teach a foal to lead by pressure and release or requesting attention and getting it. Ideally this is something that should be worked on from day one but life gets in the way and you do it when you do it. This video covers how to do when you start long after day one, like on day ninety-one.

This video is titled "Teaching Foals To Lead When They're Bigger Than You Are."

My videos are not glossy professional productions. They are not intended to be pretty, merely dispense some powerful information. In fact I call them "Wartznall Productions."

They are what I call "tractor" quality, okay, homemade even, nothing fancy but they turn over some ground.

The videos are "clinics in a box."

This video comes with an iron clad can't go wrong guarantee...If you don't think the information it contains is worth what you paid for it, simply email or contact me for a refund.

Or if you would rather purchase the entire money saving horse video stream hours and hours $30 collection click below.

Should you feel the need to talk to me personally about this video you may call me at 706 816-7190. You may call anytime but 9pm - 12pm EST increases the odds of catching me inside.